Lessons from King Uzziah's Life: The Danger of Entitlement

Lessons from King Uzziah's Life: The Danger of Entitlement

"4 And he (King Uzziah) did what was right in the sight of the Lord, according to all that his father Amaziah had done. 5 He sought God in the days of Zechariah, who had understanding in the visions of God; and as long as he sought the Lord, God made him prosper.
8... His fame spread as far as the entrance of Egypt, for he became exceedingly strong.

9 And Uzziah built towers in Jerusalem at the Corner Gate, at the Valley Gate, and at the corner buttress of the wall; then he fortified them. 10 Also he built towers in the desert. He dug many wells, for he had much livestock, both in the lowlands and in the plains; he also hadfarmers and vinedressers in the mountains and in Carmel, for he loved the soil.

11 Moreover Uzziah had an army of fighting men who went out to war by companies... 14 Then Uzziah prepared for them, for the entire army, shields, spears, helmets, body armor, bows, and slings to cast stones. 15 And he made devices in Jerusalem, invented by skillful men, to be on the towers and the corners, to shoot arrows and large stones. So his fame spread far and wide, for he was marvelously helped till he became strong.

16 But when he was strong his heart was lifted up, to his destruction, for he transgressed against the Lord his God by entering the temple of the Lord to burn incense on the altar of incense. 17 So Azariah the priest went in after him, and with him were eighty priests of the Lord—valiant men. 18 And they withstood King Uzziah, and said to him, “It is not for you, Uzziah, to burn incense to the Lord, but for the priests, the sons of Aaron, who are consecrated to burn incense. Get out of the sanctuary, for you have trespassed! You shall have no honor from the Lord God.”

19 Then Uzziah became furious; and he had a censer in his hand to burn incense. And while he was angry with the priests, leprosy broke out on his forehead, before the priests in the house of the Lord, beside the incense altar. 20 And Azariah the chief priest and all the priests looked at him, and there, on his forehead, he was leprous; so they thrust him out of that place. Indeed he also hurried to get out, because the Lord had struck him.

21 King Uzziah was a leper until the day of his death. He dwelt in an isolated house, because he was a leper; for he was cut off from the house of the Lord."
(2 Chronicles 26) 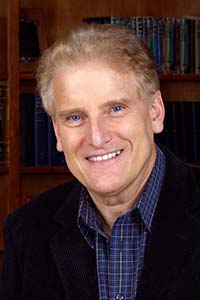 Charles Price has been the Senior Pastor of The Peoples Church in Toronto, Ontario, Canada since September 2001, with a weekly congregation of 4000+ people.  It is a church renowned for its Global Missionary activity over many years.  He has an hour-long television programme, Living Truth, which is broadcast coast to coast in Canada each week, as well as in the U.S.A, and more than 60 countries throughout the world, translated into several languages. He also has a daily 30 minute radio program which is broadcast in the U.S.A. Canada, New Zealand, the Philippines and the UK, also in French and with Spanish versions in South America.

Charles Price came to Christ through a Billy Graham film at the age of twelve in Hereford, England.  On leaving school he farmed for two years in Zimbabwe before returning to England to attend Capernwray Bible School for one year.  He then spent three years at the Bible Training Institute in Glasgow, Scotland. He was awarded an honorary Doctor of Divinity degree by Tyndale University in Toronto in 2004.

Charles was on the staff of Capernwray Bible School, Lancashire, England for many years. During this time he also engaged in an itinerant ministry of evangelism and Bible teaching in many parts of the world for more than half of each year.

He has now preached in over 100 countries on 6 continents around the World and is the author of 7 books, some of which have been translated into German, Dutch, French, Spanish, Italian, Portuguese, Hindi, Malayalam, Farsi, Korean and Latvian.

He was a recipient of a Queen Elizabeth Diamond Jubilee Medal in 2012 for outstanding contribution to bettering people’s lives around the world through mission activity and fund raising.

Charles has been married to Hilary since 1980.  They have three adult children: Hannah, Laura and Matthew and two sons-in-law.